Salespeople: Have You Planted Your Garden? 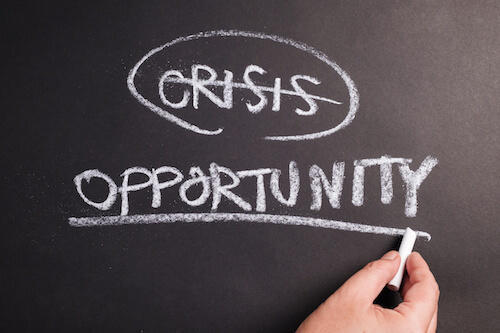 Back in the 1930s, in the wake of the stock market crash that led to the Great Depression, there was a social phenomenon in the United States known as the “Hoover Garden,” sometimes called a “Depression Garden.” Most sales professionals today have never heard of it, for the simple reason that most people today haven’t heard of it. Yet this kind of garden is an important, and understudied, part of history. It illustrates a principle that every sales team in the year 2020 should be familiar with.

Following the Great Crash of the autumn of 1929, the New York Stock Exchange lost 89.2% of its value in less than three years, the banking sector was plunged into chaos, and unemployment reached unheard-of levels. Many families simply did not have enough money to buy everything they needed at home. This led to the phenomenon of the Hoover Garden, named in (mocking) recognition of US president Herbert Hoover, whose hands-off approach to economic issues was deeply unpopular. Citizens were encouraged to turn their yards into self-generated sources of sustenance. Countless vacant lots were transformed into urban gardens that supplied families undergoing hardship with mini-harvests of vegetables that could also augment their supply of store-bought food items with home-grown produce. These gardens were also known as “Relief Gardens.” This was Depression-era self-reliance.

Why do I mention a 1930s social phenomenon in a discussion about 2020 priorities for salespeople? Because the self-reliance that made Hoover Gardens possible is a key element of the success mindset we are seeing in certain sales teams – sales teams that are bouncing back from the economic downturn that accompanied the global pandemic. That mindset, unfortunately, has not been widely adopted.

Let me explain the parallel I’m talking about in a little more detail, and why it is so very important for sales teams to notice. I’m sure it was easy, in 1929, to get used to the idea of buying all your vegetables at the market. I’m sure it was comfortable to purchase all the peas, carrots, and tomatoes you needed, and to think of it as something of a personal right.

But then, following the stock market crash and the cascading effects of the banking crisis, reality intervened.

How did enterprising people respond to that change? They changed their thinking. They adapted to the new situation. Among many other things they did, they found vacant lots that could be repurposed...and they started planting seeds. They started growing their own stuff from scratch.

What are we facing as sales professionals in 2020? A very similar situation. At the beginning of this year, it was very easy for us to get used to the idea of being handed leads that were, to some degree or another, already grown, ripened, and prepared, as it were, for our cutting board. Lots of these leads came in from internet searches and visits to our company websites; others came in as a result of person-to-person conversations led by other people in our organization, on our behalf. It was as though we could expect to pick up all the vegetables we could possibly want, any time we wanted, cheaply and easily, at our local retail outlet.

Then what happened? Reality intervened.

If we had grown used to thinking of getting high-quality leads from the “usual sources” as something we were entitled to, something that showed up automatically, we quickly realized that the time had come for us to change our thinking. All of a sudden, those leads were much, much harder to come by.

So: How should enterprising people respond? The same way that the communities that created the Hoover Gardens responded. By growing our own stuff from scratch. By improvising, adapting, and overcoming!

By this I mean we should grow our own opportunities from scratch. We may not be used to making initial contact with decision-makers and people who can give us referrals to decision-makers – or we may not have done that kind of thing for years or even decades. So what? The people who planted the Hoover Gardens in the nation’s cities weren’t used to planting and cultivating vegetables, either. They learned, or re-learned, the skills necessary to adapt to the circumstances of their time.

And that’s what today’s successful sales teams are doing, too. They’re upgrading their initial-contact skills, reaching out, and starting conversations. They’re planting seeds, tending them, and making sure those seeds get exactly what they need to grow.

So, how many initial contacts with new people – or those you know who can connect you to new people – have you made today? How many referrals have you asked for?  Even if you haven’t done that kind of thing recently, or have never done it, it might make sense to change your way of thinking and adapt to the new situation in which you find yourself. Calls, emails, InMails, and referrals are 100% under your control as a sales professional. You might want to start thinking about finding your own equivalent of a vacant lot – and planting some seeds that will mature into new opportunities for you and your organization.

Check out this section of our blog for more insights around growing your garden of sales opportunities.

10 Ways You Can Use LinkedIn to Prospect More Effectively

Colum Lundt is the Chief Revenue Officer of Corporate Sales & Consulting at Sandler. Lundt is a sales executive, consultant and trainer with over 25 years’ experience in recruiting, sales and management.
Share this article:

Video: Sandler Rule #46: There Is No Such Thing as a Good Try

Sales Training and Golf: A Lesson in Repetition